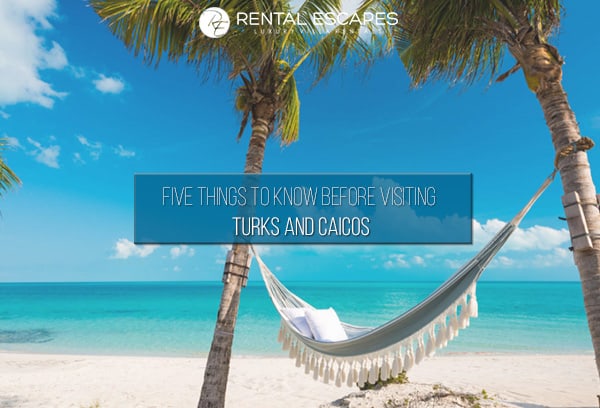 Five Things to Know Before Visiting Turks and Caicos

Over the last few years, Turks and Caicos has become one of the top tropical destinations for the rich and famous. Several luxury resorts and villas have popped up, attracting thousands of tourists to its white, sandy beaches and calm, clean waters. In addition to the stunning views, the locals are also very welcoming and gracious (and speak English!), so you’ll feel right at home. Here are five things you should know about Turks and Caicos before booking your next luxury holiday. 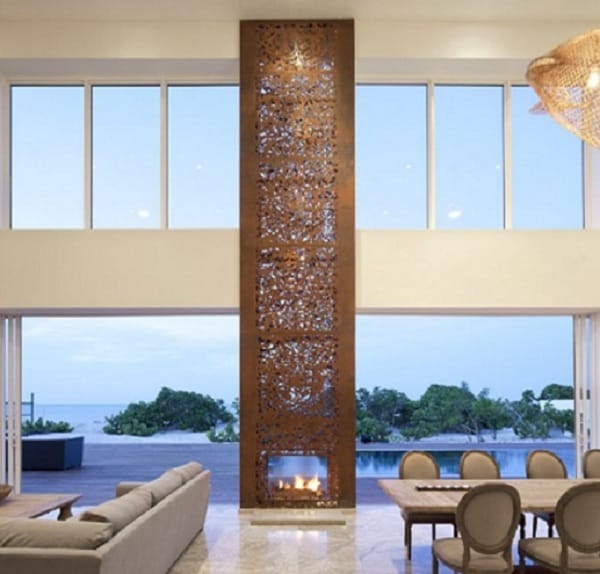 Turks and Caicos is a collection of tropical islands nestled to the east of Cuba and the north of the Dominican Republic. Due to its strategic position in the Caribbean, Turks and Caicos receives more than 350 days of sunshine a year, which is unparalleled when compared to other tropical destinations.

The average temperature year round is about 30 degrees Celsius, according to the travel website Frommers. This means tourists from the U.S. and Canada often choose this destination because it’s guaranteed to have good weather.

Keep in mind hurricanes do make landfall, and hurricane season lasts from June to November. The busiest time of year tends to be from the beginning of December until the end of March. This is when tourists typically get time off of work and want to escape the bitter chill of the continental North American winter. 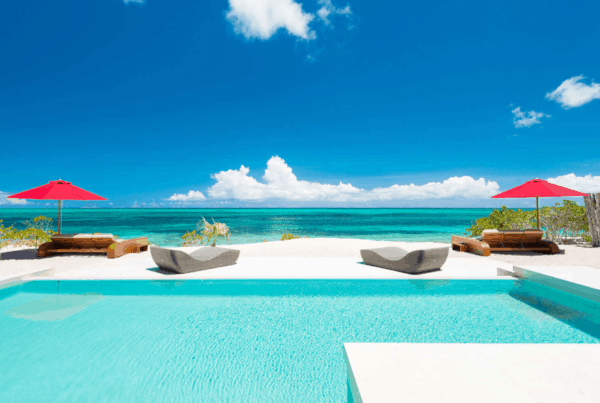 If you’re a maritime enthusiast, Turks and Caicos is the destination for you. The collection of islands is home to the third largest coral reef system in the world, meaning there’s thousands of species of fish, coral and marine animals to observe. According to a popular travel blog called the Local Adventurer, it’s important to use biodegradable sunscreen though; otherwise, you can damage the entire ecosystem when you enter the water. It’s estimated nearly 6000 metric tons of sunscreen is deposited in the ocean by swimmers, which can seriously harm local species.

Humpback whales typically migrate and feed in the area between January and April, while whale sharks can be seen throughout most of the year. Imagine swimming with these gentle giants and observing them in their natural habitat? It’s a once in a lifetime experience.

The islands boast some of the most pristine beaches in the entire world with soft white sand and light blue waters. Tourists who enjoy snorkeling and scuba diving will love this destination. Enthusiasts should visit Chalk Sound, Smith’s Reef, and Bight Reef to see the best underwater views, while beach lovers will fall in love with Grace Bay and Chalk Sound. This is all because, thankfully, the preservation efforts on Turks and Caicos are so thorough that the area is shortlisted for becoming a UNESCO Heritage Site, and many already cite Grace Bay Beach as the best beach in the world. 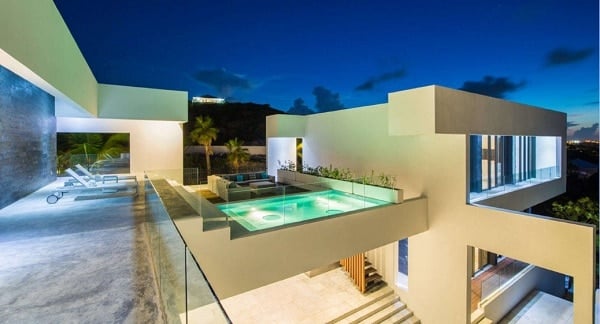 Of course, preservation efforts limit development, which in turn limits supply relative demand. In case you fell asleep during Economics class, that means prices go up, which is partly why Turks and Caicos is known as a luxury destination that attracts celebrities and billionaires from around the globe. Also, due to the fact it’s a tiny collection of islands, everything is imported from abroad. This drives up the price of everyday commodities, meaning you’ll be spending a bit more money at the supermarket and restaurants. For example, a case of beer is almost double the price when compared to back home, so be prepared to pay a little bit extra. The currency used in Turks and Caicos is the U.S. dollar, so Americans don’t need to exchange their money. That said, villas become more afordable the further inland you go, and if you stick to local specialties like tropical fruit and fresh, local seafood, you won’t pay too much of a premium on that end either 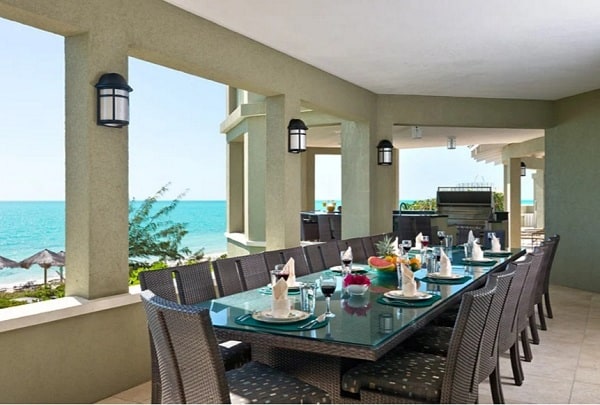 There’s not a reliable form of public transportation on the main islands, but there are taxis available, especially if you’re going from the airport to a resort or villa. Taxis are relatively expensive though, and a simple ten-minute ride can cost up to $20 per person (yes they charge per person). It’s best to rent a car to explore some of the remote parts. Since Turks and Caicos was a British colony, they drive on the other side of the road. This can be quite confusing for North Americans, so it’s crucial to pay a lot of attention and drive at a slow speed. The main city is Providenciales (also called Provo by the locals) and is where the airport is located along with the most popular resorts and villas. The capital is called Cockburn Town and is on an isolated island beyond the mainland. Besides a few historical buildings, Cockburn Town doesn’t offer tourists anything and is typically viewed as the administrative center. 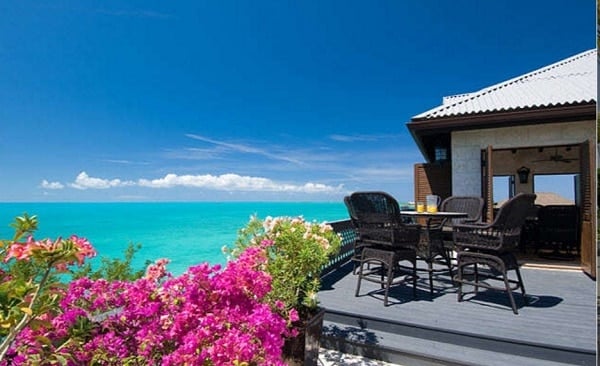 Americans, Canadians, and Britons love this country because the official language is English. Turks and Caicos was a British colony for several centuries and still recognizes Queen Elizabeth as their sovereign, meaning certain British elements can still be felt. You can always find a wide assortment of British tea (such as earl gray), and as previously mentioned, they do drive on the other side of the road.

Nearly 90 percent of the local population is Afro-Caribbean, and many tourists tend to think they sound like Jamaicans because they have a similar accent. This is incredibly frustrating to locals, and it’s advised not to make comments along these lines. The islands were once a part of Jamaica for nearly 70 years in the 1800s, so many locals view Jamaicans as their distant cousins. The population of the island is approximately 50,000, so the island is not densely populated and most people live near Providenciales or the capital Cockburn Town.

In 1974, there were rumors that Turks and Caicos would join Canada after a politician drafted a private bill to annex the islands. Although the bill was rejected in the House of Commons in Ottawa, over the last five years, there’s been renewed speculation regarding whether the collection of tiny islands should join Canada. After all, Canadians visit the island in droves every year and contribute immensely to the local economy. 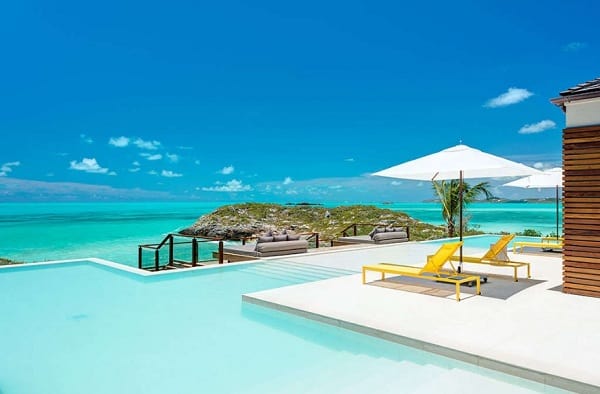 Turks and Caicos is a top destination for North Americans, especially during the dead of winter when tourists typically want a slice of sunshine. Whether you’re looking to relax on the beach or explore the world under the sea, the islands have something to offer everyone. If you’re thinking about travelling to the Caribbean in the near future, consult Rental Escapes to provide a selection of luxury villas in the Turks & Caicos to suit your needs.