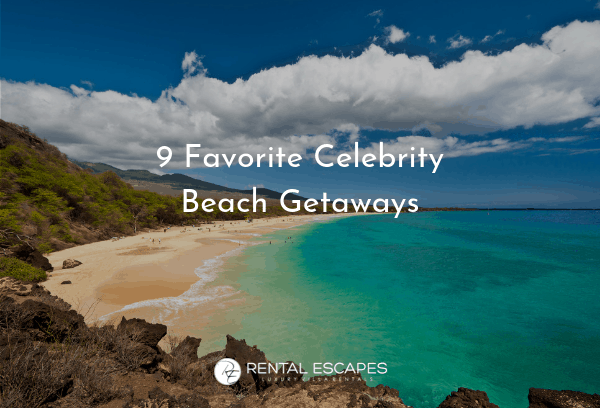 Nikki Beach in St. Jean can best be described as a sensory experience complete with pulsing music, mouthwatering food, inspiring art, and haute-couture fashion—all with a magnificent backdrop of white sand and clear blue water. The club at Nikki Beach is very popular among celebrities and has played host to the likes of Mariah Carey and Gwen Stefani.

The Bahamas’ famous Exumas region offers visitors unmatched white sand beaches and some of the clearest blue water under the sun, making it snorkeling haven! Great Exuma sees a relative lack of tourists and commercialization, making it attractive to many celebrities who live their lives in the spotlight. Celebs who have recently been spotted island hopping in the Exumas include Demi Moore, Tom Cruise, Adam Sandler, and Bill Gates.

George Clooney, Madonna, Donatella Versace, and Sir Richard Branson have all owned villas on northern Italy’s idyllic Lake Como in the Lombardy region. Surrounded by glorious mountains dotted with charming villages, it’s no wonder this 28 mile-long lake has long served as a sanctuary of serenity for the rich and famous.

The French Riviera has been a celebrity favorite since the 1850s. Americans discovered the region after WWI when writers like F. Scott Fitzgerald and Henry James made summer homes there. Coco Chanel was also known to sunbathe on the Cote d’Azur beaches—popularizing suntans in Paris!

Cabo San Lucas, or Cabo, is just 2 hours from the US, at the southernmost tip of the Baja California peninsula. It offers a winning combo of beautiful beaches, world-class spas, and golf courses. The golden sands of Médano Beach are known for its range of celebrity clientele, including Paris Hilton, Tommy Lee, and Lil Jon.

Lindsay Lohan has been spotted on Maui’s outstanding Wailea Beach. Views of Kaho’olawe, Molokini, Lana’i, along with the sights and sounds of whales are common during the winter. The fact is, however, that nearly any Maui beach will satisfy your drive for glamour.

Known for its true blue waters and remote fine powder beaches, such as those at Barnes Bay, Anguilla is frequented by celebrities thanks to its privacy from the usual paparazzi crowds. Denzel Washington, Beyoncé, and Jay-Z have all been known to vacation in Anguilla.

It’s not surprising that many celebs choose to vacation in the Maldives. The Beckhams and Kate Middleton have been known to visit the chain of 1200+ coral islands, majestic palms, and white sand beaches. This is one of the most stunning destinations known to humanity. Swim with turtles and dolphins, be pampered in spas, or book the private Coco Island all to yourself!

Italy’s Amalfi Coast is dotted with small towns dramatically nestled between the rugged mountains and the deep blue sea. Explore Sorrento, Amalfi, and Capri—where many a celebrity has been spotted, Shay Mitchell and Michael Jordan among them. The coastal trip from Naples to Positano is sure to wow you with its dramatic 500-foot drop—one of the true wonders of Italy.

To book your luxury vacation in one of the world’s top celebrity beach havens, contact Rental Escapes today!