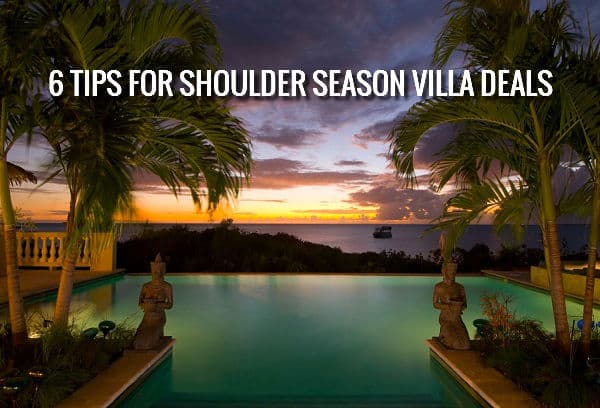 Timing is everything. Unfortunately, not everyone has that luxury when it comes to travel – if you’re North American and trying to get a big group or family to travel together to the Caribbean, for example, the Christmas and New Year’s holidays may be your only options. Ditto for Europeans looking to enjoy the Mediterranean but are stuck with August. But I think I’ve given more than enough tips for finding accommodation during peak season, including which islands are your best bet for finding availability and deals during the holidays. So now, I’d like to turn my attention to the slightly more fortunate, time-wise. Whether it’s one of the unexpected benefits of funemployment or a well-earned perk earned from years of loyal service (or whether it’s just because you’re the boss), these tips for shoulder season villa deals are for the travellers who can freely choose their vacation time and wisely decide to travel when prices are lower, the weather’s still beautiful, there are fewer crowds, and you experience a more authentic feel. Shoulder season doesn’t need a list to prove why it’s the best time to travel though – but even though its benefits maybe obvious, a list is needed to show travellers how to properly take advantage of all that these shoulder season villa deals have offer. So here it is:

Like most trips, properly executing travel plans revolving around shoulder season villa deals takes…planning, even more so than for high-season (only peak season rivals it when it comes to the importance of booking earlier). One look at a villa’s rate sheet quickly reveals to every traveller the drop in rates between low season and high season – which usually however at around 50%. Of course, this is going to make any would-be high-season traveller think about postponing their trip by a few weeks. That’s one reason why it’s so important to book as early as you can if you want to take advantage of shoulder season, but for you workers, there’s another great reason too – shoulder season trips occur, by nature, during times when employers or clients don’t expect you to travel. The more notice you give, the more they can prepare for your late-April absence, and then less of a chance that those perfect shoulder season villa deals are blocked because Kelly is on maternity leave and Bill just gave his two-week notice. 5. Double-check the dates, and negotiation prudently

The difference between high season and shoulder season may seem arbitrary to you, but it’s not. For the Caribbean, it usually starts at the end of Easter, which makes it variable. This year, for example, Easter falls in mid-April, whereas last year it fell at the beginning of April, so make sure you don’t assume that shoulder season villa deals always start at the same time. On that note, Easter week is a very popular time to travel, so don’t waste your precious negotiating power by asking for something that won’t happen, like getting low-season rates at Easter (same goes for Thanksgiving, which is when low-season tends to end in the Caribbean). The week before Easter may be a possibility for shoulder season rates this year, though, only because the holiday starts later than usual. The same goes for European beaches – obviously you can forget about August, but late June and July are still usually packed year-round, and since European beach destinations have such short seasons due to water temperatures anyways, your negotiations still likely won’t go far, though a mid-June attempt may result in some luck. Of course, better to leave this to the pros and have your Rental Escapes agent negotiate on your behalf – not only do we know all the tricks to getting shoulder season villa deals even when it’s high season (and more importantly, what the neighbours are up to), you still get to maintain that perfect rapport with the owner. I know I just said forget about European rentals in August lowering their prices, but that’s for beach destinations. Obviously, as the city workers flock to these beaches, that makes the cities themselves themselves relatively empty. Of course, you may still see high-season rates posted, which makes sense for late June and July, when young North American backpackers pile into the cities so they can make sure they tell their friends they ‘did’ Paris, London, Amsterdam, etc. Come August, though, the cities are mostly hot and empty, so if you can tolerate the heat and don’t mind a few shops being closed, it may be a great time to try to get shoulder season villa deals (or apartment rental deals) in a city like Madrid and enjoy the gorgeous historical sites surrounding it (though I wouldn’t suggest trying that in a coastal city, especially Barcelona). Caribbean-wise, late April and May are great time to visit the ABCs (Aruba, Bonaire, and Curacao, but especially Aruba, the driest of all Caribbean islands at that time), whereas for early November, the Mayan Riviera, Jamaica, and Barbados are all great bets. For European beach destinations, you generally want to go as south as you can for great shoulder season villa deals in May and June – for example, Mykonos, where the party never stops, Croatia, where boating is more popular than swimming anyways, making water temperature less of an issue, or the Spain’s Costa del Sol, where there’s enough rich history and great tapas bars to almost make you wish for an excuse to skip a beach day. You may have noticed by now that the two most important factors dictating the availability of great shoulder season villa deals are vacation-time availability and weather. On that note, realise you’re not travelling at peak season, so adjust accordingly. For example, if you’re going to Miami Beach in November, understand that the water may be too cold to swim in (unless you’re Canadian), so a villa with a nice pool by the Fort Lauderdale waterways may be your best bet if you want to get your swim on and still appreciate some lovely views. Similarly, if you’re going to the Bahamas in April, know that heavy rainfall is a possibility, which may not be the worst if you’re looking for an excuse to hit the casinos. If you’re going to Ibiza to party, though, understand that it has a strict clubbing season from May-September (unless you just want to visit the UNESCO-heritage port, in which case you’ll find great deals in April). If you’re going to Costa Rica for bird watching, make sure your favourite species doesn’t migrate that month (though if that’s your main reason for going to Costa Rica, you’re probably already familiar with the bird’s migration patterns – and you probably also know about the hundreds of other cool nature things you can do there instead). Bottom line – know what you’re getting into and make sure it’s right for you. Bearing in mind the importance of booking early (none of these tips take precedence over any other), it’s important to remember that many villas have tiered pricing, meaning the price adjusts based on the number of bedrooms booked , with remaining bedrooms simply being locked. That means you’re not sharing the villa with anyone, but at the same time don’t expect to have access to a whole 8 bedroom villa if you only declared four guests, since villas with price tiers are based on double occupancy. That said, you can always book a certain number of bedrooms to start, then add more if your party size expands. If you can’t find a villa with pricing tiers, you can also search for areas where there are lots of neighbouring villas likely to be available, like Terres Basses in Saint Martin if you’re a family or group waiting on undecided members, or Gustavia in St. Barts if you’re a couple in the same boat (because as much as your friends totally agreed about how you should all rent a St. Barts villa together over a few bottles of Bordeaux the other night, dinner party talk doesn’t always translate to confirmed departure dates). The point is, don’t wait for scragglers – book your trip, and if you suspect your group may expand in the future, there’ll be plenty of opportunities for them join later on.

Those of you wise enough to book your villa with Rental Escapes and take advantage of our complimentary concierge service aren’t always privy to what’s going on behind the scenes, but rest assured we’re hard at work trying to get you the lowest rates on additional services like yacht charters, chef services, car rentals, etc…Of course, we’re working with the same, reliable suppliers, and they know they’re working with experts, so we always get the shoulder season prices when they’re appropriate, which is most of the time. Like anything else, though, there are exceptions – a group snorkelling trip may actually be more expensive than in high season, because having less people on the trip doesn’t make the captain’s fixed costs any lower. Same for restaurants or grocery stores selling imported food (though you should always try to eat local). Still, if you run into the jet ski guy one day on the beach and he offers you the same old prices you heard last year in January, rest assured he’ll accept a little less (just don’t make the rookie move of making him negotiate with himself – don’t say “can you do any better?”; state your ideal price and go from there). Hopefully these tips on shoulder season villa deals have shown you how you can get a nicer villa and do more for less compared to high season, which in my view is why shoulder season is king of all seasons (don’t believe me? Among my last few trips were Jamaica in June and Croatia in September). It’s not for amateurs, though, so remember to follow these tips, including flexing your planning skills, independence, and, umm, flexibility, and before you know it shoulder season will become your top travel time too.