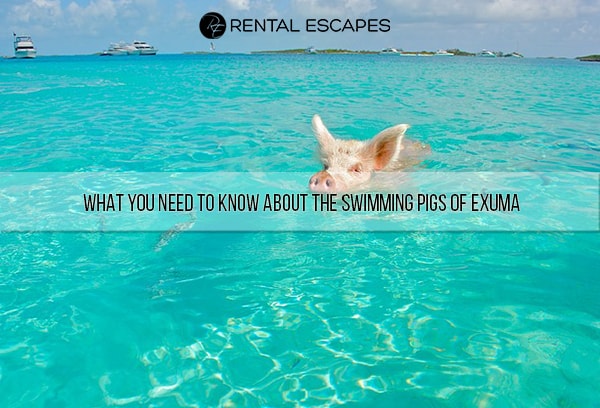 Everything You Need To Know About The Swimming Pigs Of Exuma

If you are planning your next vacation to the Bahamas and have never had the luxury of exploring the white sand beaches of the Exumas—a chain of more than 365 tiny Bahamian islands and charming cays—you are in for a real treat. Expect stunning colours, a perfect climate, and the general feeling that magic does indeed exist.

Speaking of magic, you may have heard rumour of the swimming pigs in Big Major Cay. That’s right. Pigs may not be able to fly, but it turns out they are pretty strong swimmers. As your boat approaches the little island, expect to be greeted by its sole inhabitants: loud, snorting, adorable feral pigs who paddle out to say hello as you pull into the aptly named Pig’s Beach. The pigs are not native to the island, which is located 82 miles southeast of Nassau, and 50 miles northwest of George Town, and entirely uninhabited by humans.

Fun fact: in 2014, the popular pigs inspired the award-winning short film When Pigs Swim, the first documentary to chronicle their story.

Interacting with the swimming pigs of Exuma

Since humans have become a regular presence on the island, the pigs have mostly abandoned finding sustenance in the forest—in favour of eating the food thrown for them from boats and people on shore.

Although the pigs have more than risen to the occasion of their stardom, several pigs passed away recently, and some say their ingestion of alcohol belonging to tourists played a role, but it’s more likely that sand ingestion was the cause. The good news is that healthy, thriving pigs still remain, and animal-lovers from around the world continue to visit the wondrous and affectionate pigs of Exuma.

As of now, travellers are still allowed to feed the pigs, although the local government is working on putting new regulations in place. If you do feed them, limit it to pitted fruits and vegetables, and do it in the water instead of on the shore to avoid sand ingestion. An even better alternative would be feeding them fresh water, as their supply is limited. Another thing to note is that the pigs will chase you if you’re carrying food, so if that’s not the adventure you’re imagining, you might want to go food-free.

Where did they come from?

How the pigs of Exuma came to settle where they are is rather mysterious, though there are many theories. Legend has it that the pigs were dropped off on Big Major Cay by a group of pirates who planned to come back and cook them, but never managed to return. The pigs survived on food discarded by passing ships. Another legend has it that the pigs were shipwreck survivors and managed to swim to shore, and still another claims that the pigs escaped from a nearby islet. And then there are those who suggest that the pigs were part of a business scheme to attract tourists. A man named Wayde Nixon claims to have brought the first pigs to the island with his business partner in hopes of starting up a pig farm in the late 90s. He says he was preparing a food supply in case of the feared Y2K computer meltdown. No one can say for sure which story is true.

How do you get to Pig Beach?

The only way to reach Pig Beach is by water, so you will either have to charter a boat or take a guided tour. 4C’s Adventures offers a full-day tour with a visit to the pigs, as well as nurse sharks, iguanas, a sandbar picnic, and snorkelling in the famous Thunderball Grotto—a picturesque spot featured in two James Bond films. If you’re willing to venture out on your own boat, rentals are available too. Most tours to the island run between 9am and sunset, so if you’re taking your own boat, go in the early morning to get the most undivided attention from the pigs. Although visits are allowed year-round, it is best to avoid hurricane season (June through November), as the pigs are usually taken to shelter by a local water sports company when a big storm is afoot.

If you’ve added the pigs of Exuma to your bucket list, it’s time to plan your trip. Choose from our luxury villa rentals in the Exumas and the rest will fall into place.